In late September 2022, CrisisReady hosted its inaugural “Data in Crises” event, the first session in a series of conversations highlighting research insights, policy recommendations, and diverse perspectives on how data can be used to protect communities during global crises. In each session, representatives from the field will explore how novel data can unlock new pathways for improved response by uncovering the intersections of governance, trust, technical literacy, and contextual capacities, whether it be related to an international refugee crisis, a national viral outbreak, a regional hurricane, or even a local wildfire.

September’s “Data in Crises” event focused on hurricanes, and more specifically, how data can play a pivotal role in preparing for them, responding to them, and recovering from them. A particular focus was given to Hurricanes Fiona, Ian, and Julia, which devastated parts Latin America and the Caribbean (LAC) and the Southeastern coast of the United States — namely Florida and South Carolina — in September and October 2022.

The speakers and moderators examined how the impacts of hurricanes — whether immediate or long-term — affect different communities in vastly different ways. They discussed how response organizations can attend to both types of impact, and how to make informed predictions about population displacement dynamics. Ultimately, the discussants sought to identify how, if possible, data can mitigate the hazards of cascading disaster events, specifically hurricanes.

The short-term impacts of hurricanes are what initially capture the media and the public’s attention. Short-term impacts typically include ecological and environmental destruction, the collapse of critical infrastructure, interruptions in local — even global — economies, and, of course, the hardships experienced by the communities most affected.

During the session, Hamish Patten introduced four different types of impacts — economic, environmental and ecological, infrastructural, and societal— and explained how they are often interconnected and can be used to make inferences about one another. “A very simple example could be that the number of destroyed homes multiplied by the average household size equals the minimum population displacement in […] the short term.” He explained that this a very simple and well-known example, and that there are several other scenarios that demonstrate how the impacts of a disaster can be estimated.

Attending to the immediate impacts that Patten mentioned is crucial in the early phases of response, but what about the long-term impacts of hurricanes? These can persist for months — sometimes even years — after the acute event has passed. The toll hurricanes have on the communities they devastate, including the number of deaths caused by them, are typically greater long after the storm makes landfall. So while buzz about the hurricane may become less frequent as the media shifts its focus to the next newsworthy event, these long-term impacts deserve ongoing attention and as much awareness as the immediate impacts of the disaster.

During the Data in Crises event, Michael Johansson echoed this sentiment, stating that “The long-term impacts are potentially greater and also problematic.” He listed four types of long-term impacts, citing recent experiences in Puerto Rico during Hurricane Fiona to contextualize each one. The first he discussed was mass migration. He explained that his response team saw hundreds of thousands leave Puerto Rico, and while many did come back, many didn’t. This changed the age structure and professional bandwidth of the population dramatically, as there was a particular loss of young people and health care professionals after Hurricane Fiona made landfall. That means there are more health problems that need to be addressed yet less clinicians to attend to those critical needs during and after the hurricane.

Education is another issue Michael mentioned. Interruptions to education and the closure of schools have tremendous impacts on the populations affected by disasters, especially children enrolled in primary and secondary schools. Even students enrolled in universities can bear the brunt of this impact, as remote learning models may be difficult to put into place on such short notice. Access to a reliable broadband connection and technology is an additional challenge in this scenario. The impacts disasters have on education have become more widely acknowledged due in part to the COVID-19 pandemic, which saw school closures lasting for months on end. Michael explained that these disruptions have been taking place for years in hurricane-afflicted areas, and isn’t necessarily a new phenomenon.

Hurricanes also come with political impacts. Michael cited the resignation of Puerto Rico’s former governor Ricardo Rosselló in 2019 as an example. Rosselló’s decision to resign was due to several reasons, but chief among them was the lingering public scrutiny he received about the ways he handled the impacts of Hurricane Maria, which devastated Puerto Rico in 2017. Two years later, he conceded that he could no longer remain in power after looming impeachment proceedings slowly derailed his administration.

There are several long-term health impacts that arise after a hurricane, such as weather-related morbidity and mortality, waterborne diseases and water-related illnesses, vector-borne diseases, and mental health effects. Adding to the severity of these health crises are the disruptions to healthcare and medical services. These disruptions are compounded by gaps in local data generation, collection, and analysis.

Hurricanes often lead to infectious disease outbreaks when they cause mass population displacement and exacerbate the risk factors of disease transmission. Sudden changes in environment, human conditions, and the vulnerability to existing pathogens all contribute to the spread of acute and chronic diseases.

Ivonne Rodriguez-Wiewall echoed the importance of attending to these long-term health impacts. She provides specific examples of the health challenges in Puerto Rico that arose after Hurricane Fiona swept through the territory. She mentioned that Leptospirosis, a bacterial disease with symptoms ranging from high fever, headaches, and muscle pain, has become prevalent in Puerto Rico in the aftermath of the hurricane. The disease requires critical and immediate attention, for if left untreated it can lead to kidney and liver damage and even death. In addition to Leptospirosis, Ivonne says that Dengue — a mosquito-borne viral disease common in tropical and subtropical areas — is likely to spread in the regions affected by the disaster. Asthma and mental health are two other subsequent health impacts that Ivonne states will prevail as Puerto Rico recovers from devastation.

Displacement and It’s Impact on Local Capacity an Resiliency

But what happens when doctors and other healthcare workers are displaced by a disaster? As Michael and Ivonne stated, the sudden loss of clinicians during and after a hurricane is not uncommon, and health needs — whether it be attending to physical wounds caused by a hurricane or treating a patient who has contracted a viral disease that has broken out in its wake — increase exponentially after these disasters occur. The loss of trained medical professionals is a critical and urgent issue for responders to consider.

In addition to health care professionals, the number of data scientists and analysts has diminished in regions that are frequently struct by disasters. The loss of skilled workers in STEM bears significant consequences to local capacities in collecting, analyzing, and interpreting data during disasters. The migration of these workers isn’t just attributed to acute disaster events, either.

During the session, Gail Ranglin-Edwards explained the economic pull of high-income countries, namely the United States, has caused many professionals in the Caribbean, which is home to the most disaster-prone regions in the world, to relocate for better career prospects. Consequently, the technical capabilities of people living in the Caribbean has diminished.

Because there are few data scientists in the region, Gail explained that there are few laws governing the collection and use of data. This becomes a significant barrier for response operations that rely on such information to make accurate predictions and to allocate material aid and personnel efficiently. Despite the lack of data governance, Gail says that the Caribbean is an area of huge amount of untapped potential, as it has a very high penetration of cellphone usage and internet accessibility.

The Opportunities and Challenges of Using Data in Hurricane Response

Human mobility data is among the most valuable data in emergency response. However, because the majority of the data resides in Facebook and Google, two platforms that are not widely used in Caribbean states, they do not accurately reflect mobility patterns of Caribbean populations during disaster events. The lack of representativeness is a significant problem for response agencies to consider when developing emergency plans and planning evacuation activities. It also complicates the allocation of material aid resources and deployment of personnel. If Emergency Operations Centers (EOCs) do not have a clear picture of where people are located or in which direction they are moving at a specified period of time, they may not be able to effectively attend to the urgent needs of the communities most affected by a disaster.

To resolve this gap, Gail stresses the importance of establishing more secure partnerships with the more heavily used mobile service providers in the Caribbean— Flow and Digicel. She says that these relationships would increase the access to more granular mobility data, which could dramatically shift the trajectory of how response agencies attend to disaster events in the region.

But even with secure partnerships and data sharing agreements in place, displacement can still be difficult to predict. Hamish Patten attested to this, saying that estimates from different regions often do not correlate with one another. He said that this does not come as a surprise because those who collect, distill, and interpret information on displacement are not approaching the data from the same ranges or time series. On top of this, the methods of interpretation used to predict displacement tend to be very different. You can collect displacement information from a wide range of sources, Patten said, from shelters to household surveys.

Michael Johansson stated that there are also considerable data gaps in Puerto Rico, where he has worked with response teams for several years. This is especially true in regards to power outages, which often reflect interruptions in health care systems during an emergency. Understanding where and when power outages occur is vital in protecting the most medically-vulnerable populations, as many rely on Durable Medical Equipment (DME) to manage their illnesses. Johansson explained that the impacts of hurricanes disproportionately affect these vulnerable populations and can exacerbate inequities that existed before the hurricane took place. During the session, Johansson said that while power outage data exists and are measurable, they tend to be unclear and change frequently. This can make it very hard to keep pace with the rapidly evolving circumstances of an emergency event, even if the data being gathered is generally well-reported on.

The immense changes in environmental conditions after a hurricane makes landfall causes several visible health effects, including morbidity and mortality due to unintentional injuries, drowning, heat stress, and infectious disease outbreak due to exposure to contaminated food and water. However, as mentioned by the featured discussants in the Data in Crises event, the long-term health impacts of hurricanes can go unnoticed.

There are ways to estimate these impacts with novel data sources, and many predictive models and methodologies have proven to be effective during historical emergency events. However, gaps in data sets, limitations in local capacities, issues of trust, and a lack of data regulation pose considerable challenges to responders keen on optimizing response efforts. In order to improve the response to hurricane events, a considerable amount of time ought to be invested in developing strategies to close these gaps and attend to the long-term health impacts. 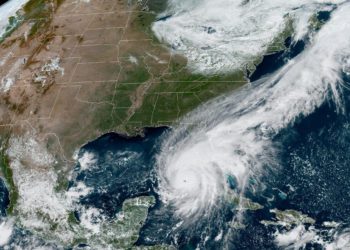