Hurricane Fiona has plunged a majority of Puerto Rican homes into darkness. Power companies estimate that it will take long to restore power. As Hurricane Maria demonstrated five years ago, loss of critical infrastructure — like water and electricity — results in prolonged cases of morbidity and mortality. U.S. Health and Human Services Secretary Xavier Becerra has declared a public health emergency in Puerto Rico.

More recently, Hurricane Fiona’s destructive path moved northward, making landfall in Eastern Canada on Saturday, September 24. Critical infrastructure has been upended in Nova Scotia, Newfoundland, and parts of Quebec. Officials estimate that the costs associated with the destruction are now in the millions. “When it’s all said and done … Fiona will turn out to have caused the most damage of any storm we’ve seen,” Tim Houston, Nova Scotia’s premier, told CBC.

On Thursday, September 29, CrisisReady convened a panel of representatives in the field to discuss the use of data during hurricanes and other severe weather events. The panelists identified the barriers and potential solutions of using existing and novel data streams to protect the health of populations in the wake of hurricanes. A specific focus was given to Hurricane Fiona and Ian, which had made landfall in Puerto Rico, Eastern Canada, Cuba, Western Florida, and Eastern South Carolina in the week preceding the event.

Gail Ranglin-Edwards is an active-duty military officer (Major) at the Jamaica Defence Force (JDF) and currently holds the appointment of Force Medical Officer.  Her primary responsibilities at the JDF include leading the Medical Services, with the responsibility for acute and emergency medical services, humanitarian and disaster response, laboratory, and aeromedical services.

Gail has led several public health efforts at the JDF, to include the US Department of Defence-led HIV/AIDS Prevention Program, a subsidiary project of PEPFAR.  She has a passion for humanitarian, emergency disaster management, and response-ignited from her tour of duty with the JDF for the 2010 Haiti earthquake.

Hamish Patten is a Solutions Architect at the United Nations Office for Disaster Risk Reduction (UNDRR). In this role, he is responsible for coordinating, streamlining, and optimizing the various components that are required to build office’s The Risk Information eXchange (RiX), a platform where the general public can explore different sources of information and data that can be used to explore disaster risk.

Previously, Hamish Receiving was a Postdoctoral Researcher in Computational Statistics at University of Oxford, where he was an EPSRC-Impact Acceleration Account grant recipient. Patten’s research at Oxford focused on improving predictive methods of human displacement from disasters.

Michael Johansson is an infectious disease biologist who has been studying Vector-Borne Diseases since 2005. He leads modeling and forecasting activities to improve surveillance, prevention, and control of arboviral diseases, including chikungunya, dengue, yellow fever, and Zika. Recently, he researched the spread of influenza and other respiratory viral infections during the COVID-19 pandemic in southern Puerto Rico.

Johansson is also an adjunct lecturer of Epidemiology affiliated with Center for Communicable Disease Dynamics (CCDD) at Harvard University.

Ivonne Rodriquez-Wiewall is the head of Direct Relief’s Puerto Rico office. In this role, she oversees the organization and leads the development of innovative projects that seek to safeguard human life and facilitate access to medical services in Puerto Rico.

Ivonne led Direct Relief’s response efforts during Hurricane Maria, which devastated Puerto Rico five years ago. During response efforts, her and the team at Direct Relief developed several programs that went beyond the distribution of medicine. For instance, an assessment of the situation islandwide concluded that part of the problems linked to limited access to healthcare and medical services was the collapse of the electricity grid, which in turn affected the telecommunications industry.

Pamela Martinez is an Assistant Professor of Microbiology at the University of Illinois Urbana-Champaign. In addition to this, she is a researcher and grant recipient at CrisisReady. Her research spans topics of computational biology and host-pathogen interactions, and focuses primarily on infectious diseases.
Martinez has recently published research on how socioeconomic factors influence COVID-19 incidence and mortality in Santiago, Chile, and how COVID lockdowns changed human mobility and the epidemiological dynamics of viral transmission.

Andrew Schroeder is the Co-Director of CrisisReady and Vice President of Research at Direct Relief,  a nonprofit humanitarian organization that provides emergency medical assistance and disaster relief in the United States and internationally.

In both roles, Schroeder leads efforts to collect, analyze, and interpret information from novel data sources, which can be used to respond to a variety of crises in a timely manner. He works closely with international public health, humanitarian, and emergency response organizations to implement novel data products into routine operations. Mobility Data, Displacement, and the War in Ukraine

Join us in conversation with representatives of UN OCHA, UNICEF, and the Jackson School of International Affairs at Yale, about data responsibility, displacement analysis, and the limits of mobility data during the war in Ukraine. 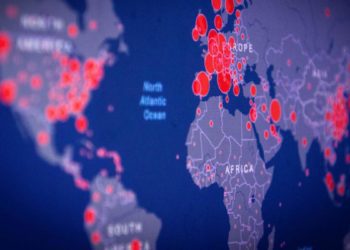